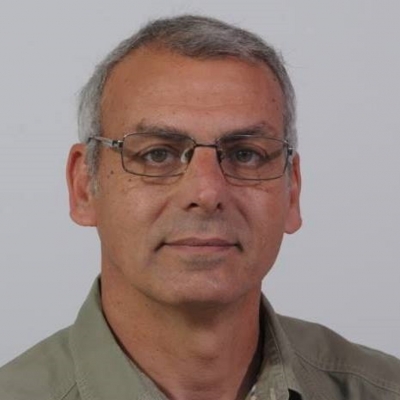 Born in Famagusta of Cyprus at 4 of June in ;

He graduated from the Technical Faculty of Limassol in the sector of Metal and metal welder .

In 1985 a ended courses for ceramics from Professor Valentinos Charalambous organized by the Center of Productivity of the Ministry of trade and ;

From 1987 up to 2000 he worked as a self-employed in his own Ceramics workshop called “Floga Pottery”.

At the same time he designed and manufactured professional Ceramic Gas ;

From 1997 and for many years he organized courses of pottery in Kaminaria that were financed by the Cultural Services of the Ministry of Education and ;

In May 2004 he organized the European Ceramic Pottery Workshop in Kaminaria in collaboration with the EKATE under Cyprus Parliament to celebrate our entrance into the ;

At the same time the last three years he participates in the European Programs for Adult Education of with the program Socrates as a representative of the Folk Culture Center in ;

From 2005 he worked in the Education Centers of Limassol as the instructor of Ceramics, and Wood ;

In 2009 he created a ceramic boat 2 m long in collaboration with Constantino Michaelides and placed at Livadia primary school .

In June 2010 Andreas was employed from Soula Christou ( Mosaic- Collective shop) working with mosaics and se ing up an ;

In 2010 he trained in the Woodwork profession in Cyprus Productivity ;

In 2011 he worked experimentally with Dr. Maria Rosaria Belgiorno Archaeologist in order to remake bronze age pottery from Pyrgos. Since then he practiced in this sector and became a professional on remaking ancient ;

In 2013 he graduated from DEPARTMENT OF SECONDARY TECHNICAL AND VOCATIONAL EDUCATION in Technical School of Limassol on Pipe welder for Liquid and ;

Till 2016 had the chance to study in deep Material Engineering and expatriated on European Funding Programs .

In 2015 he organized the 1st Experimental Archaeological Workshop on Ancient Ceramics in Cyprus 2015 working with ERASMUS INTERN ;

In 2016 he organized the 2st Experimental Archaeological Workshop on Ancient Ceramics in Cyprus 2015 working with ERASMUS INTERN ;

In 2017 he organized the 3rd Experimental Archaeological Ceramic Workshop and a traditional pottery project ‘’Pithos’’ in Geroskipou Municipality .

Also he established the ” Routes of Clay ” in Geroskipou ;

In 2018 he organized the ” Silent Artouch ” project for disabled ;

Also the 4th Experimental Archaeological Workshop on Ancient Ceramics in ;

In 2019 he organized the 5th Experimental Archaeological Workshop on Ancient Ceramics in Cyprus 2019 working with ERASMUS INTERN students in Troodos ;

2019 Environmental, research – experimental and educational workshop ancient ceramic pottery. From 24 to 30 June 2019 and 1 until 7 July 2019 In the area of Trozena – Gerovasa near ;

2019 certified as a professional trainer at ESTIA GNOSIS (h /)

He is a founder of ”Xarkis” culture Festival organization,