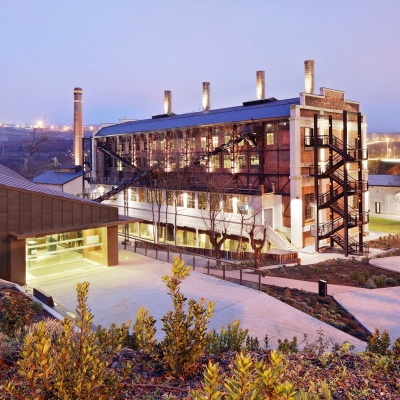 La Fábrica de Luz. Museo de la Energía is a facility dedicated to culture and dissemination in Ponferrada, perfect for learning and leisure, always being focused in the energy. Located in the ancient power station of Minero Siderúrgica de Ponferrada (known by its capital letters, MSP), the Museum is also a participative meeting point which offers a wide variety of activities for general ;

During the visit to La Fábrica de Luz. Museo de la Energía, the visitor learns how the electricity was produced from coal combustion in the beginning of last century and discovers the particularities and anecdotes of that society; how they lived, how they worked, how they enjoyed and how the use of a natural resource like coal represented the driving force for the territory and its inhabitants.

Considered one of the jewels of the Spanish industrial heritage, the restoration has been carried out with the greatest of efforts at preserving the original elements of the power plant. The restoration has also made it possible to recoup one of the jewels of Spain’s mining heritage for new cultural uses. The exquisite care for heritage restoration, the respect for the authentic architecture and the preservation of the memory and inmaterial heritage have been particularly appreciated and recognized with the Prize for Cultural Heritage awarded by the European Union and the NGO Europa Nostra in 2012 and the nomination to European Museum of the Year Award (EMYA) in 2015.

La Fábrica de Luz. Museo de la Energía has been opened to the public since the inauguration of the museum on July 14th, 2011. Nowadays it is managed through Fundación Ciudad de la Energía (CIUDEN), Spanish public entity created in 2006.