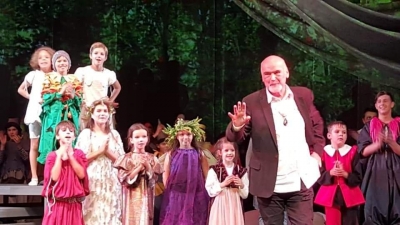 WHO ARE WE
Children's Theater and Film Studio "Defisto" was established as a non-governmental non-profit organization in 2011. We teach children and youths (between 6 and 20 years old) in acting. The education goes through the realization of professional theatrical performances, since we believe that meeting with the audience is both a natural reward for their efforts and a test for the students and for us as teachers, for their successful creative path. We have created more than ten professional theatrical plays in last ten years. Some of the titles are "Tales for young and old" and "The Snow Queen" by Andersen, "Sea Blue" by V. Petrov, "Suburb" by E. Bogosyan, "Huckleberry Finn and Tom Sawyer" by M. Twain, " a lot of love" a play based on Shakespearean texts and others.
Our theatrical performances have been played on the stages of the National Theater, State Satirical Theater, Sfumato Theater in Sofia.
The children and youths from "Defisto" receive their realization not only in theater but also in cinema. They participate in film productions, commercials, study in art schools in Bulgaria and around the world.
The purpose of Children's Theater and Film Studio "Defisto" is to recognize talented and exceptional children and to reveal their uniqueness at the earliest possible age. "Talented people need special protection from the surrounding mediocrity, which is very quickly organized against them in order to make them meaningless and unified!" These are the words of the pedagogue, director, actor and founder of "Defisto" Dimitar Elenov.

We are looking for partner from Iceland, Norway or Liechtenstein for joining experience in project preparation under the Second call for project proposals, outcome 2 „Access to arts and culture improved“, EEA financial mechanism 2014 – 2021. The project aims to enhance the access of people to culture as well as their engagement through development and introduction of...
Sofia, Bulgaria
il y a 6 mois
0 Commentaires Partager Voir idée